TWENTY YEARS BEFORE SHOCKING THE WORLD IN LOS ANGELES IN 1947 AS “THE BLACK DAHLIA AVENGER” DID GEORGE HODEL TERRORIZE CALIFORNIA BY COMMITTING SOME OF ITS MOST INFAMOUS CRIMES AND SERIAL MURDERS?

From the Introduction: In writing George Hill Hodel: “The Early Years,” my original intent was to present all my father’s suspected crimes from the 1920s and 1930s in one edition. I have found this is simply not possible as it would require a book that would dwarf Dostoevsky’s nearly seven-hundred-page opus, Crime and Punishment. Therefore, I will present “The Early Years” in two parts, two editions. This edition is Part II and presents my investigations of his suspected crimes in the 1930s. Note that I said, “suspected crimes.” I want to be crystal clear on this point. My two-part, “Early Years” investigations are just that—a search out of for the truth. …In the presentation of these crimes from the long ago (the first one goes back one hundred years), I make no claim to a “solution.” I am not saying that my father, George Hill Hodel, committed any of these crimes, beyond a “Reasonable Doubt”—which would be the legal requirement to find him guilty. Several of these crimes, without the introduction of hard physical evidence, or DNA, are not solvable. Others have been claimed “solved” by law enforcement and are considered “Case Closed.”…To be clear. These crimes from the Twenties and Thirties did not present themselves to me post-Black Dahlia Avenger published in 2003. I was aware of them and his possible involvement in them as early as the year 2000, a full three years before I presented my father to the world as the killer of Elizabeth “Black Dahlia” Short and the other LA Lone Woman Murders.

There are no reviews yet. 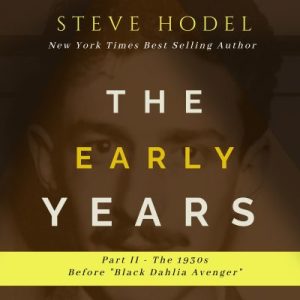